You can call Ms. Gonzalez at the number listed above and find out if there are any plans for this lot.

This site was included in a list of sites that developers are being asked to apply to build housing on by the NYC Department of Housing Preservation and Development. (seehttp://www.nyc.gov/html/hpd/html/developers/NIHOP-NCP-RFQ.shtml).

The list was published on January 14, 2015 and developers' responses are due on February 20, 2015. The fact that this site was included DOES NOT necessarily mean that housing will be developed here, but it does me that HPD is encouraging housing development and is not likely to consider other uses for the time being. If no one applies for this site, it may again be available in March!

The list and RFQ are products of HPD, under the direction of the Mayor's office. Development is not certain - this is simply a request for developers to apply to become qualified to build in these sites.

This site has been slated for one of 2 programs:

A rental housing program: 15-30 units of housing going to people making less than 165% of the Area Median Income (AMI); this means rents in these units could be more than $3,000. per month for a family of four.

Or a "homeownership"' program:
1-4 unit homeownership OR up to 14 unit coop with a preference given to developers who propose to have 1/3 of the units going to people making 80-90% of the Area Median Income (AMI; about average income for New Yorkers) and the rest being market-rate or affordable to those making more.

This article sums things up pretty well (and has the voices of folks from across the 596 Acres network):http://www.dnainfo.com/new-york/20150116/morningside-heights/community-gardens-threatened-by-de-blasios-affordable-housing-plan

You can let your City Council member, the mayor's office and HPD know if you have feedback about the program or the selection of this site. 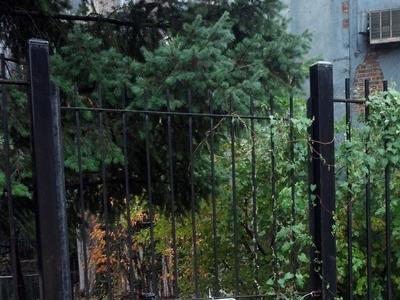 This lot is snuggled between two churches. Labeled again!

There's a garden that backs into this lovely space. Posted a sign here today.