You can call Ms. Gonzalez at the number listed above and find out if there are any plans for this lot.

A neighbor just contacted us about transforming this lot into a garden, and this is what I sent them:

This is a vacant public lot in the inventory of NYC Housing Preservation and Development (HPD).

Sign up as an organizer on the Lot Page to get updates and connect with neighbors! The page has information about the lot and helpful links.

Here is something you can do immediately: get your neighbors to sign a petition in support of a garden here! I have attached a PDF and added a file you can print and use to the lot’s page: http://livinglotsnyc.org/media/files/Example_Petition_-_Sheet1_7_up0BnJJ.pdf

& here are your next steps:

Just because this lot is included in HPD's small homes program doesn't mean that people can't organize around it! I would love to help neighbors advocate for a transfer to the Parks Department so that this vacant space can serve the neighborhood in some way.

I'm not sure if Leora is still interested, but anyone can reach out if they're interested in starting or helping with an existing campaign!

This site was included in a list of sites that developers are being asked to apply to build housing on by the NYC Department of Housing Preservation and Development. (see http://www1.nyc.gov/site/hpd/developers/request-for-qualifications/nihop-ncp-rfq.page).

The list was published on January 14, 2015 and developers' responses are due on February 20, 2015. The fact that this site was included DOES NOT necessarily mean that housing will be developed here, but it does me that HPD is encouraging housing development and is not likely to consider other uses for the time being. If no one applies for this site, it may again be available in March!

The list and RFQ are products of HPD, under the direction of the Mayor's office. Development is not certain - this is simply a request for developers to apply to become qualified to build in these sites.

This site has been slated for one of 2 programs:

A rental housing program: 15-30 units of housing going to people making less than 165% of the Area Median Income (AMI); this means rents in these units could be more than $3,000. per month for a family of four.

Or a "homeownership"' program:
1-4 unit homeownership OR up to 14 unit coop with a preference given to developers who propose to have 1/3 of the units going to people making 80-90% of the Area Median Income (AMI; about average income for New Yorkers) and the rest being market-rate or affordable to those making more.

This article sums things up pretty well (and has the voices of folks from across the 596 Acres network):http://www.dnainfo.com/new-york/20150116/morningside-heights/community-gardens-threatened-by-de-blasios-affordable-housing-plan

You can let your City Council member, the mayor's office and HPD know if you have feedback about the program or the selection of this site.

We're still trying to get an answer from Rasheed at GreenThumb! Working on it... 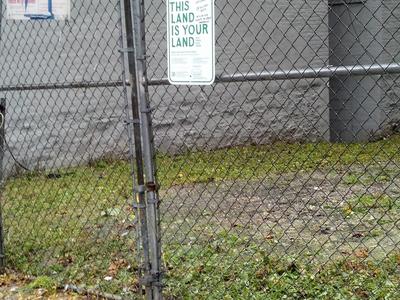 So happy to have Leora from Goddess on the Go and GEMS (http://www.gems-girls.org/) interested in creating a garden!!! I let her know to contact GreenThumb to confirm what Housing Preservation and Development (who has jurisdiction over the site) told me before: that this site has no development plans and can be used for community use.

Any updates? Has anyone started organizing? This is a great opportunity since HPD has already given the OK!

Ms. Walters returned by call: there are no immediate plans for this space!!! She said the next step is to introduce yourselves to GreenThumb! You can shoot Rasheed an email or give him a call:

Simultaneously, neighbors should should start collecting:

Once you have all this put together, you can present it to your community board: Manhattan 10. (Click on the Who Respresents Me? link on this page to get their contact info.) Getting a letter of support from the community board is the essential last step. Then, everything can be submitted to GreenThumb.

Any updates on opening up this fence for the community?

I always wondered who owned that lot. Three years I've been living here and thought it belonged to a developer sitting on the property and waiting for the value to go up before he can build condos. I'm fuming at the city for letting it just sit there and become nothing but a home for stray cats and weeds while the homeless population goes up.

We put a sign on this very accessible lot today!