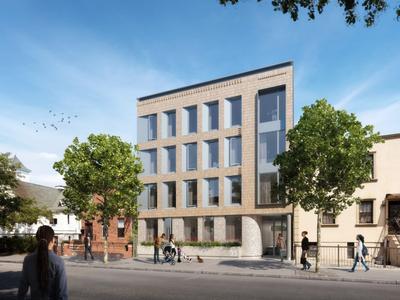 The Department of Housing Preservation and Development plans to sell the sites adjacent to Herkimer Street between Kingston and Ralph avenues, where builders plan to raise four- to seven-story condos with a total of 78 units, spokesman Felipe Cortes told Community Board 3’s Land Use Committee Wednesday.

The agency filed a land use review application to sell the properties for $1 to Manhattan firm Fulcrum Properties along with Queens developers Jobe Development Corporation and the Briarwood Organization who will jointly construct the buildings at the following addresses:

However, Bedford-Stuyvesant’s median household income in 2017 was significantly lower at $52,900, according to a report by New York University’s Furman Center, and condos constructed under the proposed deals would be priced for residents with annual salaries between $64,020 to $105,633 per year — $11,120 to $52,733 above the area’s average income.

But the development would bring Mayor Bill de Blasio closer to his stated goal of creating 300,000 below-market-rate housing units by 2026. As of July, more than 135,000 “affordable housing” units have been constructed since hizzoner declared his target back in 2014, with 25,299 created in fiscal year 2019, according to the city.

Not all of the city’s affordable housing schemes have been well received, especially those involving the sale of public land.

In 2017, the Legal Aid Society sued the city to prevent the Economic Development Corporation from leasing out the publicly-owned Bedford-Union Armory in Crown Heights to developer BFC Partners, which agreed to construct a mix of market-rate and affordable units, along with a state-of-the-art recreation center.

Opponents of that scheme blasted the deal — the early incarnations of which featured a host of luxury condos — as a giveaway to developers, which they feared would supercharge gentrification in the neighborhood.

But the developer agreed to ax the luxe condos and enhance the project’s affordable housing components, and a judge later dismissed the Legal Aid suit in July last year.

Before the city can sell off its property to developers, City Council will have to approve the land transfer following a lengthy public review process, through which the builders will also seek an Urban Development Action Area Project designation, which carries a 20-year exemption from real estate taxes on the assessed value of the building.

The city and developers will present the proposal at the civic panel’s next full board meeting which will then give its purely advisory vote on Dec. 2.

I will to buy this land to Bill my house

Hello everyone! Sandra just called to plan a meeting for THIS SUNDAY, November 20 at 2pm. It will be in the greenhouse at Green Valley Community Garden and Farmer's Market (livinglotsnyc.org/lot/58882/), 93 New Lots Ave at Sackman Street. The 596 Acres General Meeting is at 3pm at the same place, and you are all invited to flow right into it. Event details here: http://596acres.org/events/596-acres-general-meeting-at-green-valley-community-farm/

Looking forward to hearing your ideas for our land. See you there!

Hi everyone! Any updates? Would be awesome to collect signatures (you can use this blank petition: http://livinglotsnyc.org/media/files/Example_Petition_-_Sheet1_1_4pguQYi.pdf) and call a planning meeting with interested neighbors to envision the future community space for this too-long vacant spot. :o)

Today's meeting has been postponed. Sandra is checking the availability of seniors in the community along with folks affiliated with the school down the street. I should be able to post a new meeting date on Wednesday. Stay tuned here for updates!

Join Sandra and me THIS SUNDAY, SEPTEMBER 11 at 11AM at the 596 Acres Office at 540 President Street #2E, Gowanus, Brooklyn to develop the proposal for a community garden at this space! Sandra has photos of the land and a mission statement for the group. All neighbors are invited to come and be part of the planning process. If you have trouble getting in, you can call me at 718-316-6092 ex 3. Let's make the Open Space that was planned for this land back in 1968 a reality!

Just checked in with Council Member Cornegy and Community Board 3, asking this question via email:

"Do you have any updates about the City’s plans for the lots between Suydam and Rochester and Atlantic and Herkimer (http://livinglotsnyc.org/lot/58273/)? The neighbors have been waiting for this space to become something for decades. It was planned as as "Open Space (Park & Playground)" in the Central Brooklyn Urban Renewal Plan in 1968.

Any insight you can offer would be great. Thank you!"

We got a nice note from a neighbor about this lot:

"I'm a big green thumb fanatic and I would love a project for this upcoming summer. I'm very much interested in finding out how can I help those 2 lots to become a park, I love the fact that they are adjacent and I believe that they would make a spectacular Park for the entire block and community to enjoy. How do I go about it?"

Here is information about the lot you wrote to us about. Start by clicking Organize on the lot’s page and signing up: http://livinglotsnyc.org/lot/3018640049/

The great news is: your neighbors are already engaged here and want to hear from you. Get in touch with them:
Chopp Stewart, chopp.stewart@thefutureproject.org, 904-405-6291
Denise, hamblin.inc@gmail.com, 917-601-4877
Dewayne David, dewaynedavid41@yahoo.com, 929-371-0660
Jenna Dorce, jenna.m.dorce@gmail.com, 347-675-4430
These lots are part of the Central Brooklyn urban renewal plan. All of the lots were planned as open space but now the lots are in the jurisdiction of Housing Preservation and Development. They are on an aggressive housing-building track right now, so getting land on loan is very hard. But it’s completely possible to convince HPD to transfer the land to NYC Parks for stewardship as a community garden. HPD does not seem to have any specific plans for this site right now.

You will need to organize your neighbors to create a campaign that will convince the Parks Department that your community group will be successful stewards. You will need:
A mission or vision statement that lists benefits to the community;
A letter from Community Board 3 in support of the project and group; contact bk03@cb.nyc.gov / 718-622-6601, district manager: Henry Butler to get on the agenda of the Parks and /or Housing Committees; if you are emailing, copy me.
A name for the proposed garden/group being formed to look after the garden;
List of community members interested in the project (at least 10 names, addresses, phone numbers, emails);
Sketch or rendering of project
Signatures on a petition from as many people as you can get; I’ve attached a PDF you can use.
List of partners/sponsors/endorsers (including churches, school, local business, city agencies, etc.); having local block associations on board would be key here!
You might also be able to get a letter of support from GreenThumb. Once you have a group together, reach out to greenthumbinfo@parks.nyc.gov to let them know what you are aiming to do.

Here is a petition you can use to gather your neighbors’ signatures: http://livinglotsnyc.org/media/files/Example_Petition_-_Sheet1_1_4pguQYi.pdf

Let us know what questions you have!

March 29, 2016, 7:46 p.m.
paula at 596 acres uploaded
Petition you can use to gather names of people who want to see this lot transformed It seems like Spring is a great time to get energy together for this future project! Here is a blank petition sheet you can use to gather signatures from your neighbors. Let us know if you have any questions: organizers@596acres.org
July 17, 2015, 5:18 p.m.
Mary @ 596 Acres said

About a month ago neighbor Diane called 596 Acres asking if there was a good organizing target in her neighborhood. We pointed to her the large lot on Suydam Place between Atlantic Avenue and Herkimer Street that is planned as "Open Space (Park & Playground)" in the Central Brooklyn Urban Renewal Plan, but has been sitting vacant for a very long time instead. This week, Denise called to let us know she has gathered a dozen residents who are interested in teaming up with organizers who have already started planning for a community farm. Awesome! I connected her with Chopp.

I spoke to Chopp and some of the ladies in her group on Friday night. They're excited and going to start working on the things below!

From Chopp:
"I am apart of a collective of women who are in the burgeoning stages of our non-profit organization, Weightless. Weightless, a celebration of cosmic exploration, connecting young underserved women to their nerdy love of space. We intend to utilize this space as Bed-stuy's own neighborhood observatory, nurturing the communities connection to and curiosity of the cosmos. We will also utilize the space to develop an urban farming & compost program to draw a connection between the macrocosm of our outer worlds to the microcosm of our plant world and how this is replicated in the breakdown of organic waste through composting as well as the interconnectivity present in agriculture and astrology."

We should reach out to Bob Cornegy's office about this.

We labeled these lots yesterday and chatted with three neighbors who had no idea that the lot was city-owned and planned as open space. They're going to share this info with the block association. Hopefully we'll be opening up this park soon!

These lots were planned as Open Space (Park & Playground) in the Central Brooklyn Urban Renewal Plan. This plan justified the city's acquisition of the property, relocation of whomever worked or lived here and the demolition of any structures on the property at the time. See http://www.urbanreviewer.org/#map=13/40.6763/-73.9242&plan=Central+Brooklyn

The neighbors are still waiting for the open space that was promised. Let's make it real!