This group of lots has become a playground - all rubber mats and not green space. I’ll share pictures when I can go by there again.

I just got this note from Carlos.Martinez@parks.nyc.gov:

" We now have green light to activate ACS on a case by case basis as long there’s a group of neighbors willing to steward the site. "

To get your lot on GreenThumb's transfer list, get in touch with him ASAP.

I hope this email finds you in good spirits!

596 Acres is hosting an event this Sunday in your neighborhood, and we'd love for you to join us:

Why: With signs, we can connect with our neighbors about the possibilities for transforming the vacant land in our lives, share the hidden City policies that are influencing places on the ground, and shape the city that we share.

Details: Folks of all ages and kids welcome. No stairs to get into the space. Light refreshments will be served. Spanish interpretation available.

Sending warm wishes. Hope to see you there!

Some more history about these lots...

According to ACRIS, the city took ownership of all five lots in a series of foreclosures from 1976-1979.

"IPIS" stands for Integrated Property Information System and is a database of city-owned properties. According to the city, the lots are indeed owned by the Administration for Children's Services (ACS).

To learn more about the history of the playlot, you can reach out to the Katmint Learning Initiative, an early childhood education facility located down the street that has been there since 2013. They may have a sense of when it started falling into disrepair.

Brooklyn Community Board 3 Outreach
Former CB chairman Tremaine Wright is now serving in the assembly; Richard Flateau has assumed leadership of the CB3.

Somebody from the Lexington 1801 Block association contacted us looking to create a new community green space on their block! ". We've recently originated a block association and have already been the recipients of Citizens committee for NYC monetary awarded for block beautification. Absolute nothing would make us more complete then beginning and building a strong healthy garden."

Now the group is organizing to transform this abandoned public playground! They're taking the steps outlined in the email I wrote back to them last week:

Looks like there's an abandoned playground owned by NYC just on the corner of Marcus Garvey and Lexington that might be the right place for your future garden. It's Brooklyn block 1624, lots 6, 7, 8, 9 & 10. Here's the lot page: https://livinglotsnyc.org/lot/59085/.

Our team walked by in 2012 and saw that the daycare next door, Little Fun People, was using it. By 2015, our team walked by again and observed nobody seemed to be using the playground anymore. Do you know if anybody is using it now? Or is it abandoned?

If it's not it use, you can organize with your neighbors to have the land transferred to the NYC Parks Department so your block association can steward it as a community garden through the NYC GreenThumb program! This is probably the best option for long-term stable community use. Start by contacting GreenThumb at (212) 602-5300 or greenthumbinfo@parks.nyc.gov.

You can begin organizing your neighbors to create a campaign that will convince the Parks Department that your community group will be successful stewards. Here are some things you might consider gathering as you organize your neighbors, which will help you build a successful campaign:

If the lot indeed seems abandoned, you can start right now by collecting signatures from neighbors who are in favor of a community garden here. You can print and use this blank petition: https://livinglotsnyc.org/media/files/Example_Petition_-_Sheet1_1_YPsCF1r.pdf (also attached) !

Let us know if you have any questions! 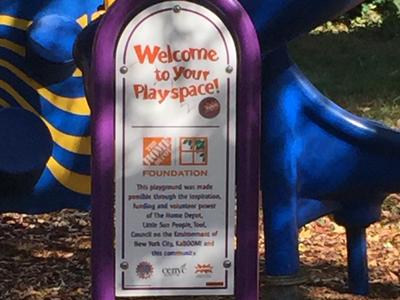 GrowNYC (when it was the NYC council on the environment) was one of the facilitators of the creation of this space. They will likely be a good partner for its rejuvenation as well. Contact: Mike Rezny Assistant Director Open Space Greening Grientc 100 Gold Street, Suite 3300 New York, NY 10038 mrezny@grownyc.org p 212.788.7935
Oct. 23, 2016, 2:51 p.m.
Paula posted 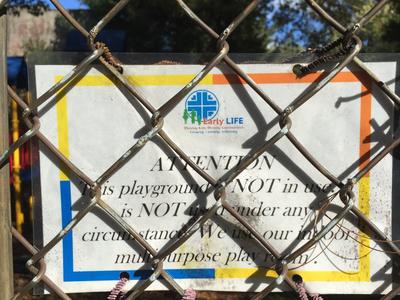 This playlot has fallen into disrepair since we last photographed it in 2012. It does not look like it is being used now.

There is some picnic tables and a playset in this lot.

there is a playground on this lot.

there is an active playground on this lot.

Lot is fenced in. Google Street View shows a playground and some picnic tables.