Parks are protected in New York State for the use of people as open space. A City in the State cannot decide to simply close down a park and use the land for something else without getting approval from the state government after land has been dedicated as parkland.

In order to convey parkland to a nonpublic entity, or to use parkland for another purpose, a municipality must receive prior authorization from the State in the form of legislation enacted by the New York State Legislature and approved by the Governor. “Once land has been dedicated to use as a park, it cannot be diverted for uses other than recreation, in whole or in part, temporarily or permanently, even for another public purpose, without legislative approval.” United States v. City of New York, 96 F.Supp.2d 195, 202 (E.D.N.Y. 2000). This clear law has been applied consistently since 1871.

The question is: what is parkland?

The term “dedicated” is often used in referring to municipal parkland subject to State alienation requirements. Common phrases include “lands dedicated for park purposes” and “dedicated parklands.” The dedication of parkland may be formal through an official act by the governing body of the municipality.

Dedication can also be implied. This may occur through actions which demonstrate that the government considers the land to be parkland or the public used it as a park. Examples include: a municipality publicly announcing its intention to purchase the lands specifically for use as a park, “master planning” for recreational purposes, budgeting for park purposes, or “mapping” lands as parkland. Kenny v. Board of Trustees of Village of Garden City, 735 N.Y.S.2d 606, 607 (App. Div. 2nd 2001)(property acquired for recreational purposes and used for recreation was instilled with public trust even though never officially dedicated).

Here is the State's handbook on alienation, updated September 2017: https://parks.ny.gov/publications/documents/AlienationHandbook2017.pdf

Ridgewood, Queens – The NYS Department of Environmental Conservation (DEC) is considering designating the Ridgewood Reservoir as an official wetlands! This will help this home for 156 bird species and 175 species of plants be a protected community resource. NYCH2O is ON IT: Click to begin downloading their sample letter you can modify; send to kenneth.scarlatelli@dec.ny.gov here: http://www.nych2o.org/uploads/4/6/4/7/4647928/wetlands_support_letter_for_ridgewood_reservoir.docx

New York Today: Protecting the Reservoir That Made Brooklyn
https://mobile.nytimes.com/2018/02/27/nyregion/new-york-today-ridgewood-reservoir-brooklyn-queens.html?referer=

Image
Matt Malina, the founder of NYC H2O, calls the Ridgewood Reservoir “a treasure for the community.”CreditDave Sanders for The New York Times
By Alexandra S. Levine
Feb. 27, 2018

Good morning on this radiant Tuesday.

The Ridgewood Reservoir, which began operations on the Brooklyn-Queens border in 1858, was added this month to the National Register of Historic Places.

“Without this supply of water, Brooklyn would not have been able to grow into the third-largest city in the country in the 1860s and, by the end of the 19th century, an industrial powerhouse,” said Matt Malina, the founder of NYC H2O, a nonprofit that provides educational programs on city water and ecology. “And now it’s a treasure for the community.”

When we visited the reservoir, a 50-acre oasis in Highland Park that was decommissioned by the 1980s, we discovered what looked like a fall scene from the English countryside: a gray-blue pond, flat and still as glass, surrounded by a golden meadow and the remnants of a centuries-old iron gate.

Inside one of the reservoir’s original 1858 gatehouses, which regulated the flow of water to the basins.

The reservoir, with three basins that held 300 million gallons of water, transformed what was then the city of Brooklyn from a farming area into an industrial metropolis. “The nexus of Brooklyn’s water system,” as Mr. Malina called it, brought in water from remote reservoirs across Long Island and, eventually, from the Catskills.

In the days before electricity and plumbing were widely available, the reservoir changed everything for New Yorkers.

Steam engines, the main power source at the time, used up to 10,000 gallons of water a day, Mr. Malina said, and as the flush toilet gained popularity around the time the reservoir was created, demand for water intensified.

IMAGE
Cardinals in the Ridgewood Reservoir.

Comments should be emailed to kenneth.scarlatelli@dec.ny.gov or mailed to:

Yesterday the ridgewood reservoir was added to the NY State Registers of Historic Places. Here is the application NYCH2O submitted:
http://www.nych2o.org/uploads/4/6/4/7/4647928/ridgewood_nomination_draft_6.pdf

Thursday, December 7, 2017
National Registry Update
I just received the following email. A huge thank you to Matt Malina and the folks at NYC H2O. There have been so many folks from concerned residents to various community organizations, local community boards, city / state / federal politicians who worked to save the Ridgewood Reservoir from development, but NYC H2O gave the final, necessary big burst of energy to get it done:

I’m happy to confirm that the State Review Board voted unanimously to recommend the Ridgewood Reservoir for nomination to the State and National Registers of Historic Places. Congratulations! Early next week, the structure will be formally listed on the State Register and the package will be mailed out to the National Park Service. You should receive a letter notifying you along the way. It typically takes about 2-3 months to hear back from the NPS, and I’ll let you know once I’ve heard any news.

Matt – it was great to finally meet you, and to have you and Steve speak on behalf of the project. The board always enjoys hearing from the people behind the projects, who have worked diligently and passionately to bring them to fruition.

Have a great weekend!

Here is a summary of our advocacy work over the past 2 years at Ridgewood Reservoir: http://www.nych2o.org/ridgewood-reservoir.html

You must be clairvoyant because our next step is to draft a sign on letter with Council Member Crowley whose district the Reservoir lies in :-)

DESCRIPTION
The NYC Parks Department will be holding two back-to-back meetings on June 21 to discuss the future of the Ridgewood Reservoir. NYC H2O encourages all Ridgewood Reservoir neighbors and enthusiasts to attend these meetings.

The 7pm session is critical to the City’s latest planning efforts for the Reservoir’s future. The importance of providing input as to the Reservoir’s unique ecological value from communities situated on both the Brooklyn and Queens side of the border cannot be overstated. Attendees will have a chance to make their voices heard as advocates for the Ridgewood Reservoir by commenting publicly on Park’s presentation.

Advocacy Talking Points: A vision for the Reservoir that advocates for concrete goals
Preserve and protect a cultural + ecological treasure (overall goal)
obtain wetlands designation
secure national register nomination
create plan for invasive species (e.g., phragmites) and natural plantings
Promote nature educational programs (NYC H2O)
renovate abandoned buildings as field stations / outdoor classrooms
create controlled / curated access to the floor of basins (1 and / or 3)
Improve safe and easy access to Park and Reservoir
improve transit access / pedestrian safety
address illegal ATV’s that ride in a menacing way in the park
Promote opportunities for local youth involvement, training and employment
The CEA application is available at this link and is relevant to the Reservoir’s imminent wetland designation. NYC H2O supports this designation and hope you will come to the meeting to speak in its favor. Comments can be emailed by July 5 to Owen.Wells@parks.nyc.gov or delivered in person to Parks with any additional materials submitted by the deadline. 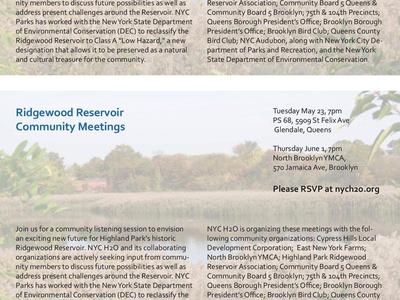 community is organizing! Tomorrow evening, Thursday, June 1 at 7pm at the North Brooklyn YMCA, 570 Jamaica Avenue in Cypress Hills, Brooklyn, join NYC H2O in collaboration with many nonprofit and governmental partners for a community meeting to envision an exciting new future for Highland Park’s historic Ridgewood Reservoir. More information and RSVP at nych2o.org!
Dec. 8, 2016, 8:58 p.m.
Mara at 596 Acres uploaded
Matt Malina of NYCH2O's testimony about an an accessible boardwalk here that descends into the basins to allow closer observation of this unique, magical landscape for December 1, 2016 City Council Committee on Parks and Recreation Hearing http://legistar.council.nyc.gov/MeetingDetail.aspx?ID=516682&GUID=1AE07C53-11EC-4BAD-8A8E-BEC0FDA88B9B&Search= Watch video at the 02:23:20 mark http://596acres.org/inaccessible-parks-properties/#nych2o
Nov. 25, 2016, 7:30 p.m.
paula at 596 acres said

There are three basins here off limits to the public.

There are 2 gatehouses are at the northern side of the reservoir and are also closed. They are in bad repair though and would need major work for people to visit them.

The folks at NYCH2O are advocating to re-open them: http://qns.com/story/2016/07/28/learn-about-one-of-the-citys-less-known-water-systems-the-ridgewood-reservoir/