Ideas are being solicited to turn an underutilized part of Tremont Park into a community asset.

A Request For Expressions of Interest has been issued for a corner of Tremont Park near East Tremont and Third avenues where the first Bronx Borough Hall, demolished in 1969, once stood.

Only the staircase leading to where the building stood remains, but the RFEI promises to be the first step in creating something new and useful at the site by soliciting input from civic and community groups, major non-profits and real estate developers.

Councilman Ritchie Torres and Community Board 6 held a joint press conference at the location on Friday, October 27, hoping to draw attention to the RFEI, which John Sanchez, CB 6 district manager said could eventually be the basis for a Parks Department Request for Proposal for a specific future project.

Torres said he sees Tremont Park as a “jewel in the crown of the central Bronx,” and a place with a great deal of historical significance as the home of old Bronx Borough Hall, which was the center of political power in the Bronx in the early part of the 20th century.

“Since the 1960s, when old borough hall was demolished, there has been nothing that has emerged in its place,” said Torres, “I had a vision for reimagining the site of the old borough hall.”

The councilman said that at his request the Parks Department issued an RFEI soliciting proposals for reactivating this part of Tremont Park.

The possibilities are endless, said the councilman.

They could include, according to the RFEI, recreational facilities and programs, eating and drinking establishments, festivals and performances, amusements, markets and fairs, and public art.

“We have begun the process of transforming an idle part of Tremont Park into a center of programming and amenities for the local residents of the central Bronx,” said Torres.

Community groups or other entities that are interested can submit the proposals up until 3 p.m. on Monday, November 13. They are normally delivered to Parks Department headquarters in Manhattan.

The RFEI was released on Monday, September 25.

Sanchez said that CB 6 has already helped spread the word of the RFEI to parties that may be interested.

A community center for the location has long been a goal of CB 6, said Sanchez, adding that he has seen a document in the Bronx County Historical Society archives indicating that the board requested such a use as early as 1965.

“The number one wish or priority for the community is for there to be some kind of community center or recreation center at the space, and this is not a new idea,” said Sanchez. “It would be a great story to finally get it done.”

But the RFEI is wide open, he added, and would hopefully include ideas for an unused comfort station around the former building’s footprint, he said.

A spokeswoman for NYC Parks Department stated that the agency is working closely with both the councilman and CB 6, adding that the department is looking to work with business interested in providing services, activities, program or concessions at the location. 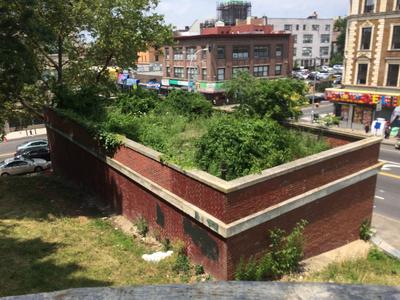 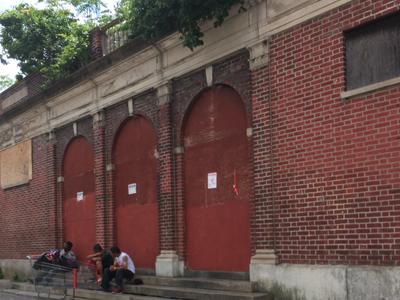 Folks resting in shade of building While this closed comfort station provides shade on a hot July day, what else could it provide if it were open and maintained?