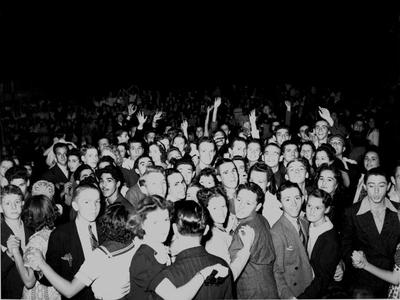 Poe Park bandshell maybe 1940s from: https://www.nycgovparks.org/about/history/concerts In addition to the Philharmonic concerts frequently performed in Van Cortlandt Park, the bandstand at Poe Park (erected in 1925) featured regular classical music concerts that drew large crowds. Beginning in the 1940s, contemporary big bands performed in the park, and singer Rosemary Clooney (aunt of actor George Clooney) is reported to have made her public debut at the Poe Park bandstand. The Rolling Stones also used Van Cortlandt Park for the site of a press conference to announce their 2002-03 tour; a large blimp carrying the band took off and landed in the park. And DJ Kool Herc pioneered the sound of hip-hop at Cedar Playground in the University Heights section of the Bronx.
Dec. 15, 2017, 2:39 p.m.
mara at 596 acres said

Poe Park is part of this story:

A street near Poe Park in the Bronx will be renamed “Bill Finger Way” on Friday in honor of the late, unsung co-creator of Batman — marking the first time the city has renamed a roadway after the creator of a superhero.

Comic fans are expected to gather at East 192nd Street and the Grand Concourse around 10 a.m. for the unveiling ceremony, which will be hosted by the Bill Finger Appreciation Group.

Finger’s granddaughter, Athena, is scheduled to speak at the event, along with Councilman Ritchie Torres and Marc Tyler Nobleman, author of “Bill the Boy Wonder: The Secret Co-Creator of Batman.”

“The ceremony will be short but we want a big crowd to celebrate four Bs (Batman, Bill, the Bronx, the Big Apple)!” an event description reads on Facebook.

Why Poe Park? Because that’s where Finger used to bounce ideas off Batman co-writer Bob Kane, who was credited as the sole creator of the Dark Knight for years due to a clause in Kane’s contract.

The pair went their separate ways in 1939 after developing the Detective Comics #27 comic, in which the Caped Crusader made his first published appearance — and Finger’s name was ultimately left off every issue after that.

It wasn’t until 2015 that DC Comics gave him the credit he was due and decided to acknowledge his contribution to the series, which included the idea of giving Batman a cowl, cape and gloves — and the name, “Bruce Wayne.”

Finger, who died in 1974, also aided in the early development of Batman’s rogues gallery, including iconic characters like the Joker, Penguin, Catwoman, Two-Face and Riddler.

“Bill Finger was a contributing force on Batman right from the beginning,” Kane wrote in his 1990 autobiography. “I made Batman a superhero-vigilante when I first created him. Bill turned him into a scientific detective.”

Notes from Beth Bingham who worked on our Parks Inventory this summer:

While Poe Park in the Bronx boasts a new visitors center with popular programming, and an open Historic House Trust building on site, the park also has a gazebo that served the community for decades that is now closed due to disrepair. The gazebo in Poe Park for decades served the community as a site for local informal and formal programming. The Bronx Community Health Network has been working with a coalition formed to activate 6 parks in the central Bronx with local programming and other activities intended to improve public health. The group is interested in partnering with 596 Acres to host a dance event in Poe Park celebrating local talent, teaching dance, and bringing attention to the closed structure that once hosted musicians performing for dancers in the park. Much has been written/documented about the cultural significance of the gazebo. Tim Nottage's post contains many links to some of these stories.

GROUNDTRUTHER TIM NOTTAGE ON POE PARK’S PAST AND PRESENT
(read it with photos here: http://596acres.org/intern-insights-on-poe-park/)

Last week, in humid 90 degree weather, Sam and I rode our bicycles through the Bronx, groundtruthing parks that might have buildings in need of advocacy. One of our stops was Poe Park, on Grand Concourse. In addition to trees and benches where residents could seek a shady escape from the summer heat, the park hosts three buildings: Poe Cottage, built in 1812; a gazebo known as the Poe Park Bandshell, constructed in 1925 (https://livinglotsnyc.org/lot/59324/); and a Visitor Center opened in 2011.

At Poe Cottage, where Edgar Allen Poe lived from 1846 until he died in Baltimore in 51849, folks can see the living quarters and a statue of the poet. A capital project tells us that restoration work is being done on the exterior pathways. While open on other days for tours, when we visited a large lock kept us at a distance from the place where Poe spent his last years.

The recently built Visitor’s Center is, physically, a sharp contrast. The contemporary design is reminiscent of Poe’s Raven with it’s sleek, wing-like v-shaped roof and feathery, slate tiled siding. Open and welcoming, we refilled our water bottles and engaged the friendly staff, who enthusiastically showed us the Poe-inspired art gallery and the busy schedule of art-making, fitness, and cultural programming. After hearing from them some of the historic ailes the neighborhood has faced, I could sense what a necessary space this park has been for the health of the community.

Yet it was the third structure that attracted my attention the most. The active playground and the Visitor’s Center were both in active use; Poe Cottage is certainly maintained and used, even if that use is restricted to only three days a week. The Poe Park Bandshell stood empty. The towering gazebo, with soaring pillars and a patinaed roof, was locked by a black iron gate, standing as an island in a sea of hot pavement.

We learned from the staff that the bandstand is closed due to dangerous structural issues. Through my research, I could find no mention of public plans to restore the Bandshell, although as noted earlier there are plans to reconstruct paths to Poe Cottage, which although owned by the Park is operated by the Bronx County Historical Society. The historic value of Poe Cottage is well documented; it reminds us that only two centuries ago, this was farmland, not the urban landscape we see today. Yet the bandstand itself is a powerful symbol of the neighborhood with many stories of its own.

The bandstand was erected in 1925, and classical music concerts drew large crowds. In the 1940s, it hosted big band performances, and it is reported that Rosemary Clooney, famous singer and actress, made her public debut here. According to the Parks Department website, the park was a “popular locale for outdoor music concerts” and “a hub of the community’s social life”. Concerts, dance contests, and fashion shows were regular occurrences from the 1940s into the 1970s. Poodle skirts and the Lindy Hop were replaced by bell bottoms, Soul, and Funk music, which was in turn replaced by Hip-Hop dance battles; the Poe Park bandstand hosted it all.

At an event put on by the 5 Boro Story Project in 2014 called “Back in the Day at Poe Park: A Bronx Storytelling and Music Festival,” many residents shared their memories of Poe Park and the neighborhood of Fordham. (You can find some incredible video documentation on YouTube.) Of those telling stories was Lucy Aponte, who not only roller skated at Poe Park and attended concerts at the bandshell herself as a little girl, but got to know her children’s peers at the Hip-Hop battles; kids who grew up to become the now famous B-Boys from Rock Steady Crew, like Crazy Legs and Fable.

I’m grateful that Lucy, a tireless advocate for art and community who was named NYC Parks Employee of the Year in 2014, is managing the programming at the Poe Visitor’s Center. I hope we soon see the Bandshell, which served as a social hub at this park for so long, renovated and repaired for the benefit of Bronx residents. This public treasure is symbolic of a vibrant and resilient community, and should be protected and restored to serve it.

Tim is a designer and aspiring urbanist from Oakland, California. He is passionate about making equitable and resilient communities. He also creates interactive sculpture, builds scenery for theatre and film, and writes. He is a graduate student in Theories of Urban Practice at Parsons, The New School.

Intern Insights is a series of blog posts from 596 Acres’ 2017 summer interns! Gazebo Closed This gazebo, formerly a site of community events such as fashion shows and cultural celebrations, is closed due to structural defects.
July 20, 2017, 1:40 p.m.
parksbuildings posted 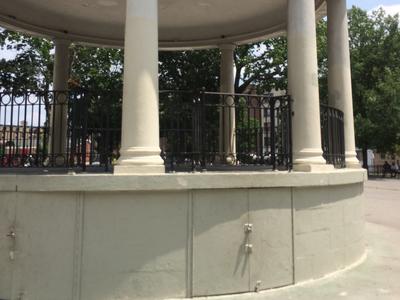 Gazebo Closed This gazebo, formerly a site of community events such as fashion shows and cultural celebrations, is closed due to structural defects.