The narrative below was written in 2006 and is from http://michaelminn.net/newyork/buildings/public_baths/ (click the link for photos).

The 5 Rutgers Place bathhouse is currently surrounded by the 1,100-apartment LaGuardia Houses NYC Housing Authority complex that was completed in 1957. This complex is just to the East of the Manhattan bridge and South of East Broadway. As with the Rivington Street building, the building of the housing complex resulted in the demolition of the surrounding tenements and street grid, removing Rutgers Place from the map and isolating this building. The complex is bounded by the current Rutgers, Madison, Clinton and Cherry streets. Also as with Rivington Street, the building is abandoned and was probably bricked in during the mid 1970's financial crisis.

A young resident of the complex noticed me taking photos and asked whether I was with the city and what was going to happen to the building. When I responding that I was just taking photos for my website, he expressed his opinion that the building was a blight and should either be torn down or renovated for use by the community. I mentioned that I shared his opinion and would convey it here. But until we elect civic leaders with a more progressive attitude towards the renovation and development of urban infrastructure, this relic may retain its funereal, pallid charm for some time to come.

This afternoon, about 200 people held a rally in the Little Flower Playground at the La Guardia Houses, a public housing complex on the Lower East Side, to demand that the city help renovate and reopen the long-abandoned La Guardia Bathhouse as a center for recreation and for elderly residents.

The building, once known as the Whitehouse, was closed in the early 1970s amid the fiscal pressures of that decade.

“This building has been a blight on this neighborhood for three decades,” said Councilman Alan J. Gerson, a Democrat who represents the area and helped organize the rally. “I call on the City to join with me and my colleagues at the city, state and federal levels, to turn this eyesore into a much-needed recreational facility. It is a matter of political will.”

In a Times article published on July 9, Timothy Williams used the vacant recreation center as an example of the declining involvement of the city’s Department and Parks and Recreation in providing recreational opportunities for young people. After-school programs have taken up much of the role once occupied by recreation centers, and the century-old tradition of having Parks employees supervise children at playgrounds after school and on weekends has all but disappeared.

Asked for a response to the rally, the Parks Department, which controls the La Guardia Bathhouse, said in a statement:

The La Guardia Bathhouse was closed during the fiscal crisis of the 1970s. The nearly 100-year-old structure is in such poor condition that it cannot be rehabilitated. The Parks Department continues to be open to any reasonable proposals for a public-private partnership to construct a new facility on the site. We are also open to any effort by local elected officials to secure and allocate the $40 million it would cost to build a new facility and to fund the $1 million in annual operating costs.

Parks has an extensive network of network of public and non-profit recreation and fitness centers and newly renovated parks and sports fields in the immediate area.

Not all residents would agree with that assessment. In June, about 80 people gathered outside the Whitehouse to discuss why the recreation center was necessary. They proposed all sorts of programs that could be housed in a reopened building, including basketball games, community health programs, a ping pong room and meals for seniors.

The building consists of three floors, with a partial roof pavilion and basement, and comprises approximately 18,300 square feet. It is located on Madison Street, between Rutgers and Clinton Streets, but originally faced Monroe Street, which was partially paved over when the La Guardia Houses were built in 1957.

The building was renovated in the 1930s into a recreation center with a pool on the ground level, locker rooms and a gym on the upper two floors. It is not a city landmark.

Ms. Gerson believes that the bathhouse can be rehabilitated, and he has sought help from other politicians, notably the Assembly speaker, Sheldon Silver, and the city’s public advocate, Betsy Gotbaum, who is herself a former parks commissioner.

According to Mr. Gerson’s office, two local organizations, the New York Foundation for Senior Citizens and Urban Dove, have submitted proposals for the project to the Lower Manhattan Development Corporation for financing to help transform the building into a recreation center and a space for older residents. But the fate of such financing is uncertain, and even if it came through, it might not be nearly enough to cover the extensive work that would be required to renovate or replace the bathhouse.

I talked to a woman who's lived across the street for 60 years and she says it was a bath house. Also that the city attempted to reopen it a couple years ago but wasn't sure what happened after that. 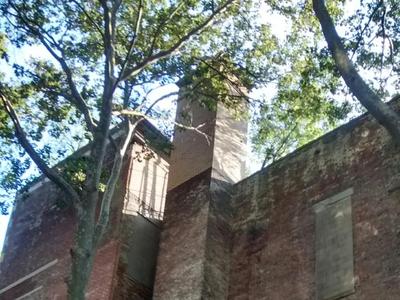 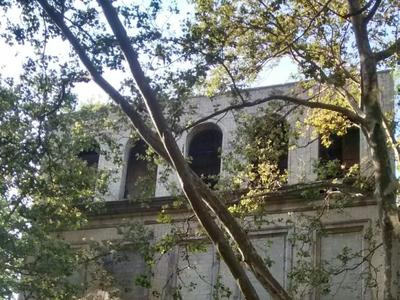 This building is promised for senior housing but has been vacant for decades.