There are many things you could create with access to vacant public land in your neighborhood. A playground?  A community garden?  A butterfly garden or other wildlife habitat? A space for concerts, meetings, or movie screenings? All that’s needed is some organizing ingenuity and imagination.

Many existing community gardens on public land are licensed through GreenThumb, a part of the Department of Parks and Recreation. GreenThumb is a route to long term and interim-use licenses between gardeners and City agencies that own land. GreenThumb also sometimes shepherds interim projects on formerly vacant public land into becoming permanently protected projects by transferring them to the Department of Parks and Recreation.

Some sites on vacant land in New York City exist by means of an agreement directly between community organizations and the specific City agency that has site control over the land.  The Gowanus Canal Conservancy, Added Value in Red Hook, and the new Myrtle Village Green site in northern Bed-Stuy are examples of groups that have access to formerly vacant public land by having an agreement directly with a City agency.

The Department of Citywide Administrative Services has been under a mandate from City Council since December of 2011 to maintain a searchable database of all city-owned and city-leased property with the goal of gathering information regarding whether properties might be suitable for community use. This database is part of the way we put lots on the map; the portion regarding whether lots are determined to be suitable for urban agriculture and other community projects was added on November 15, 2013 (the column is faaaar to the right on this spreadsheet; note that lots under 2500 square feet are not considered urban agriculture-appropriate, but they might make nice small community spaces nonetheless).

Some NYC community spaces are part of a “land trust”.  Land trusts are non-profit organizations whose mission is to conserve land, usually for the benefit of the public in the form of parks and open spaces.  In NYC, local land trusts, such as the Bronx Land Trust, the Manhattan Land Trust, the Brooklyn-Queens Land Trust, and the Brooklyn Alliance of Neighborhood Gardeners have acquired many lots with the express purpose of keeping them open to the public as community gardens or other community spaces. The land’s public use is made permanent in its deed - the legal document that conveys ownership to the land trust.  Future owners of the land may have to to continue its use as a community garden (or other acceptable public use).  If the owner can or will not continue such use, they may have to convey the land to another organization that could keep up its use as a community space. Sample deeds can be found here to give you an idea of how these restrictions are phrased to achieve maximum effect.

There are hundreds of gardens on New York City Housing Authority (NYCHA) campuses. With only a few exceptions, NYCHA land is reserved for gardening by NYCHA residents; gardening on NYCHA property by NYCHA residents is supported by the NYCHA Garden and Greening Program.

Some community sites in NYC are privately owned by organizations whose mission it is to support them, like the New York Restoration Project. Some are owned by the organization that runs them and some public spaces are simply there with the permission of the landowner (others are on privately owned land without the owner's permission).

Many vacant lots in New York City are privately owned. Community groups and private landowners who see the benefits of having a site actively used, versus sitting abandoned and vacant, sometimes work together to create community spaces and opportunities. The big difference is that when working with a private owner it is really all about the relationship. Read more about working with private landowners here.

Getting access to land as a community is never a straight line. Below is a list of pathways that have successfully led New Yorkers to the lots in their lives. Some only work for certain types of properties and some are always an option. Click for details and read the summary to see how they fit together. Enjoy the journey! 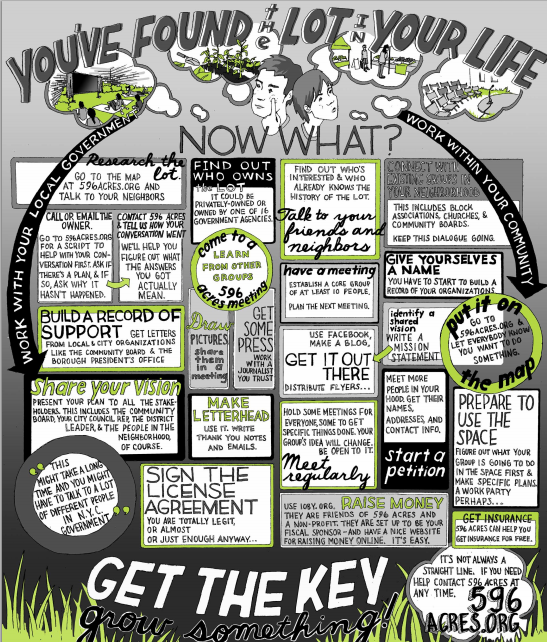